Bangun jer terus online n checking on email n weather broadcast...no email from him...could be busy..hmmm...no missed call on my phone as well...i keep googling for the Typhoon updates....and at 3.50 am he online...we have long chat untill 4.00 am plus...untill he need to go back to his work again...

Owhhh...sangat lega. And at 5 am..new updates...the Typhoon change it path...Ya Allah..syukur walaupun sebenarnya tetap x best...sebabnya it could hit Phillipines dgn teruk. Tapi tak jugak, semua expect this one could be Super Typhoon...but then Allah lebih Mengetahui...the Typhoon moves slow down...n start to move back to sea...apa pun it still landed at Isabella, Phillipines. One was found dead due to it. I still can't sleep...so masak mihun goreng for breakfast...after subuh then sambung chat with him. He already waiting for me...we have long chat till morning...then baru sambung tido balik. Today i need to work...Terima Kasih Ya Allah, menjaga dia....Alhamdulillah juga no breakdown on our communication...Syukur Alhamdulillah.... 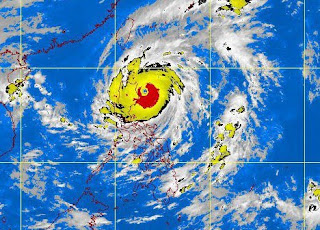 A report on the PAGASA website said Juan made landfall at Sierra Madre Mt. Estagno Point at Divilacan Peak at 11:25 a.m.

As of 2 p.m., Juan was located 40 kilometers south southeast of Tuguegarao City with maximum sustained winds of 190 kph near the center and gusts of up to 225 kph.

PAGASA senior weather forecaster Robert Sawi earlier warned that "Ondoy-like" rains could affect parts of Northern Luzon as the typhoon slows down. "As it gets slower, it becomes more dangerous for affected areas," he said in a press briefing.

He also noted that the typhoon could shift south and affect Pangasinan.

He also warned of possible landslides in the Cordillera Administrative Region and Mountain Province due to heavy rains brought by Juan.

The province of Isabela, meanwhile, declared a state of calamity due to the onslaught of the typhoon Juan.

"This is the highest storm warning signal we can raise. Storm Signal No. 4 is 185 kph and above and we expect to feel that in the next 12 hours," Sawi told radio dzMM in an interview.

He said he expects the storm to exit the country via Ilocos Sur and will be out of the Philippine area of responsibility by Tuesday evening.

UnPreDictable yet SiMplE pErsoN....I aM the PersOn wiTh the CraZy Mind...